Glover Country is the beautiful Tasmanian landscape where colonial artist John Glover once walked, lived and created his masterpieces.  Just south of the charming town of Evandale Tasmania, lie the plains and hills referred to as “Glover Country”.

Glover Country covers an area of 4000ha, which includes the original land grants of Glover and his neighbour Robert Pitcairn of Nile Farm. The area is now listed by Heritage Tasmania as both a built and natural cultural site. The property includes Glover’s house and barn at Patterdale, as well as the house which Pitcairn built and named Nile Farm.  Glover possibly chose this land due to its picturesque views in all directions, fertile valleys and rolling hills surrounding Nile River.

John Glover is often referred to as the father of Australian landscape painting. Born in England, he left his successful career to arrive in Van Diemen’s Land in 1831 where he lived up until his death in 1849. Despite his age, Glover was enthusiastic about the light and the strange plants found in Tasmania; particularly at Patterdale and the Nile River at Deddington. He was also very aware of Aboriginal presence on this land, creating imagined scenes of peaceful pre-colonial times a number of times.

Glover Country allows you to walk and paint in Glover’s footsteps, experience the landscape he loved, enjoy local Tasmanian produce and learn about the history of a place so rich with culture and heritage.

Just months after arriving in Tasmania, John Glover’s homestead at Patterdale was built and ready for occupancy in the first half of 1832. Perhaps because of the rushed construction there were many structural defects which necessitated ongoing repairs from  the time the house was completed. Particularly, the footings became unstable, which later resulted in the front wall collapsing in the 1920s.

Repairs were expeditiously undertaken using concrete and weatherboard externally and panelling over all of the internal walls.  The paneling hiding either cracks in the lathe and plaster or the total absence of wall surfaces.  Fortunately, most  of the interior timberwork remains relatively intact, making it possible to bring the house back to its former appearance. After years of neglect, the owners of Patterdale, Carol and Rodney Westmore took on the painstaking task of restoring Glover’s homestead to its former glory.

The restoration commenced in August 2016, with the first priority to secure the structural integrity of the house before any restoration could take place.  Glover’s studio ‘the Exhibition Room’ will also be rebuilt  using the same split palings and timber shingles evident in the original building.

Looking to the future…

The restoration of Patterdale will reflect Glover’s painting A view of the Artist’s House and Garden, in Mills Plains, Tasmania,1834,Art Gallery of South Australia.  Once the house is complete it will be available as accommodation, and the Exhibition Room will also be available as studio space for a residency program for artists and historians. A visit to Glover Country is ideally suited to artists or people who wish to immerse themselves in the landscapes in which Glover was once so entranced.

View the Landline Story on ABC about the property restoration.

View the restoration Story in Tasweekend 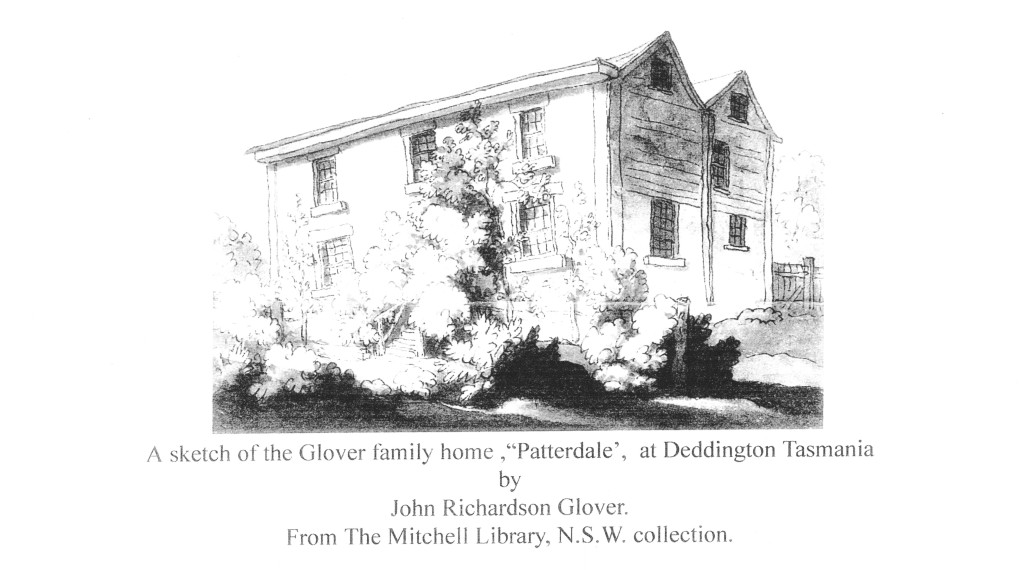 1775-1851: Glover was also a contemporary of fellow of another British Romantic landscape painter JMW Turner.

1831: On February 18, Glover arrived in Van Diemen’s Land (Tasmania), which also happened to be his 64th birthday.

1831: Glover applied for a land grant for Patterdale and Nile River, at Deddington.

1832: The homestead at Patterdale was built and ready for occupancy for John and Sarah Glover.

1849: On December 9, Glover died at the age of 82 and was buried at Nile Chapel, at Deddington which was built on land that neighbor Robert Pitcairn donated.

1920s: Due to the rushed construction of Patterdale, the insufficiently strong footings led to the front wall becoming unstable and collapsing.

2003: The John Glover Society Inc. was established in Evandale, Tasmania, to highlight and protect the works and heritage of John Glover.

2004: One of Australia’s most prestigious art prizes for landscape art ‘Glover Prize’ was launched in conjunction with the Glover Concert.

2015: Local residents Carol and Rodney Westmore took on the task of restoring Glover’s homestead to its former glory.

2016: The Westmore’s received a grant from the Infrastructure and Jobs Fund from the Federal Department of Industry and State Government.  These funds will make it possible to rebuild John Glover’s Exhibition Room following the restoration of the house.