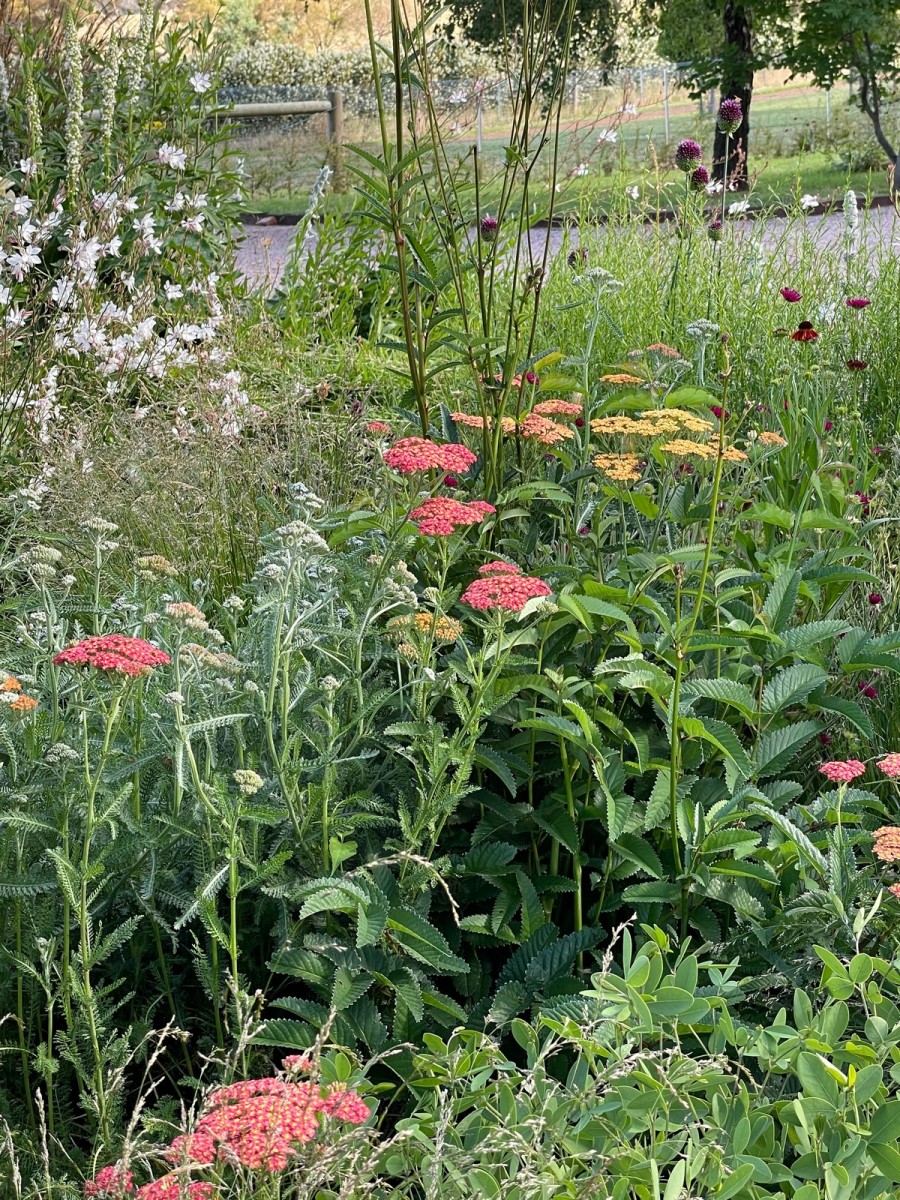 In early 2019 I was honoured to be asked by Carol Westmore to design a garden at John Glover’s property. Given the quality of the building restoration and historical significance of the garden, it was a responsibility I did not take lightly.

John Glover painted his garden in 1835 and, in doing so, left us a record of the garden in its early years. This painting was an obvious start for the garden and Carol had built some planting beds based on the layout of this original garden. The painting shows an extensive and flat garden around the house and stretching nearly as far as the hills to the west. I spent much time pouring over this painting and also a previous one that John had painted at a North Hobart property. I spoke to horticulturalists and researched lists of plants that were known to have been brought to NSW very early in the settlement of the colony.

Some of the plants in John’s paintings looked reasonably obvious; such as the roses, lilies, yellow verbascum, rosemary. Others, like the yellow broom, hollyhocks, possible native Bursaria or white broom, possible native Olearia were a best guess and the rest appear as little more than dashes of colour making a definite identification very hard.

It was obvious from the start that we would not be able to simply recreate the garden as it appeared in the painting. The scale of the garden is much smaller now than it was originally. It is cut off from the wider landscape to the north by a Hawthorn hedge and large Elms. A large Oak tree overhangs the garden to the east. These plants are from a later era of the garden’s history and we didn’t want to remove any of them.

In order to be able to have a garden at all, a wire fence was built around the perimeter of the area. Possums are trapped when necessary but we still had to be mindful of the potential issues of pademelons, rabbits and possums. Judging by the appearance of roses and other perennials in the open in John’s painting, this may not have been so much of an issue in the 1800’s.

Some of the plants grown in John’s time would be considered to be weeds today. The brooms are declared weeds in Tasmania. A lot of the yellow verbascums are too weedy to use with confidence. I had already walked the hills and seen the impact of garden escapees in this fragile landscape and it was important not to add to this problem.

Significantly, whilst John planted and painted his own garden for his personal pleasure, the garden was now to be open to the public for most of the year. This garden needed to have a succession of interest and colour, even through the winter months. And it needed to do this with minimal maintenance.

John had painted one moment in the lifespan of a garden from one aspect. Later in the year it would have looked different. Later in its life it may have looked very different, once shrubs had matured. I realised, in fact, that we don’t even know how much artistic licence he was employing by painting nearly all of his plants flowering at the same time. He was, after all, an artist of great imagination and may have been painting what he wanted to see as much as what was there!

After much deliberating and a reasonable degree of angst, I decided that the best way forward was to give Carol a garden that would provide flower colour and structure for most of the year. To create a garden of beauty that John would be happy to paint were he alive today. I also wanted a garden that would to do this quickly, as it was due to be open to the public only a few months later.

I returned to John’s painting and chose his main colour palette to be the dominant theme. But, rather than having most of these colours flowering at the same time, I spread the dominant colours through the year. Spring was to start with the fresh young greens, white flowers and yellow daffodils. As we were trying to source the old pink variety of rose that John may have used, summer would then be a dominance of pinks, reds, yellow and white with a little purple. The closest to his painting in fact. By autumn the grasses would come into their own with their soft yellows and straw colours, peppered with the yellows of the Achilleas. I choose a few plants, such as the tall Calamagrostis grasses to emulate the verticality of the broom in the painting. It is softer and more subtle but harmonises perfectly with the building. In winter the perennials die down or display their browns and the evergreen colour of the Rosemary, Daphne, Stachys and Libertia amongst others, provide a winter structure.

I settled on a matrix planting because the garden would be seen, not from a single viewpoint like the painting, but from all angles at all times of the year. This is a garden to walk through and experience closely. It is densely planted to suppress weeds, plants are repeated and intermingled to provide a succession of density and colour through the year.

The tall grasses are placed roughly where the broom are in the painting, the roses in their original locations. Other heights and colours are filled in as best as possible in relation to the painting.

The garden was planted in early June 2019.

During the process of the design I visited Deddington Chapel and sat by John’s gravestone. I told him of all the difficulties and differences in the garden now and what I was hoping to achieve there. I hoped that, even though I wasn’t able to recreate his garden, that he would approve of this modern interpretation. I hoped most of all that were he here today he would find the garden beautiful enough to want to paint it. He was quiet on the matter but perhaps I caught something of his spirit, because I felt an easing in my heart as I left the graveyard.